Jacob Simon, Research Fellow at the National Portrait Gallery in London, has followed the documentary trail which links Hogarth to the Huguenot framemaker, Isaac Gosset.

William Hogarth, Mr Gosset, and the story of a frame

In 1745, the Lord Chancellor of Ireland, Lord Wyndham, made a bequest of £200 to Lincoln’s Inn, one of the four Inns of Court, for a painting to adorn ‘the Chappel or Hall or both’. Two years later William Hogarth was commissioned to execute the chosen subject, Paul before Felix, which was appropriately both legal and Biblical: the apostle Paul appearing before the Roman procurator, Felix, and the prosecutor, Tertullus. This is one of Hogarth’s largest (at 120 x 168 ins) but least known paintings, as it has remained in Lincoln’s Inn since 1748. 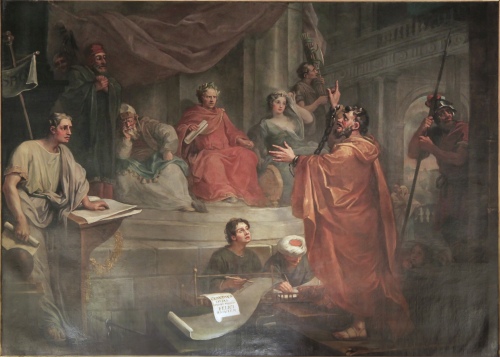 In the Dictionary of English Furniture Makers (1986), the frame of this monumental painting is given to Gideon Gosset of Berwick Street, London: ‘A member of the famous family of carvers of French extraction, who had fled from Normandy to Jersey at the time of the Revocation of the Edict of Nantes [1685]’. This attribution is based on Hogarth’s letter, presumably to the Inn’s Treasurer for 1748, John Wood, regarding the position in which the painting should be hung and a suitable frame for it. He suggests that it should hang in the Hall, and should be inclined forward to catch as much light as possible:

‘… it being thus Inclin’d will make ornaments on the sides improper, so that a Frame only is necessary.  I have enquired of Mr Gosset a Frame Maker in Barwick [sic] Street about the price of one some what in the manner of the sketch below, he believes it may come to about 30 pound Guilt, to about half as much unguilt and about five pounds less if my Lord Windhams [sic] armes are omitted. Frames may be carried up to a great expense but he thinks one cannot be made in proportion to the picture for less.’

The sketch of the frame is annotated on the left: ‘a Moulding of 11 or 12 Inches broad with carving at the corners and in the Middle’, and at the top: ‘my Lord Windhams armes if judged proper’. There is also a postscript: ‘I have removed the picture home again in hopes of making some improvements whilst the Frame is making.’ 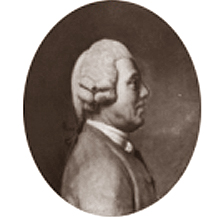 ‘Mr Gosset’ was evidently one of the Huguenot family of Gossets, three generations of which became carvers and gilders. Gideon, the middle of three brothers, lived and worked at Berwick Street, and was possibly in partnership with his youngest brother, Isaac. The eldest, Jacob, was established in Warwick Street and supplied frames to Frederick, Prince of Wales and the Earl of Northampton, amongst others. Their uncle, Matthew, was also a carver and a wax modeller (in which Isaac followed him), and left his house in Berwick Street to the two younger brothers. Isaac produced frames for artists such as Gainsborough, Allan Ramsay, and William Hoare; his clients, or those of his brothers, included Lord Digby of Sherborne Castle, Lord Egremont at Petworth, the 4th Duke of Bedford, and the Royal family. He was appointed the King’s framemaker (under the title Joiner of the Privy Chamber) in 1774, at the age of 61, continuing unofficially in this post for three years after its abolition in 1782.

It is now clear, thanks to the archivist at Lincoln’s Inn, Josephine Hutchings, that the original frame for Hogarth’s Paul before Felix was supplied by Isaac Gosset, rather than Gideon, according to a payment record in the Treasurer’s Accounts for 26 April 1751, which reads:

In spite of this payment being £5 less than the estimate Hogarth had conveyed in his letter, it is clear from T.H. Shepherd’s image of the Hall at the head of this article that Lord Wyndham’s arms were carved at the crest of the frame (although without the supporting lions of the sketch). The delay of three years before Gosset was paid may have been occasioned by Hogarth taking back his picture for further work, as the Council allowed in February 1751, at which time the work awaited framing. Hogarth himself had been paid his £200 for the painting in 1748, and submitted a beautifully written receipt to the Treasurer.

Gosset’s frames were well-made, with finely-carved detail and a bravura richness to, for instance, the two dozen full-length frames he produced for Allan Ramsay’s state portraits of George III in his coronation robes.

King George III, studio of Allan Ramsay, the frame probably made by Isaac Gosset, 1774, detail; the portrait and frame probably issued to General Thomas Gage in his capacity as Governor of Massachusetts, Firle Place

These also had as their pendants the companion pictures of Queen Charlotte, bringing the number of state portraits in Gosset frames to around fifty, only a handful of which have survived in various historic houses. The frame of Paul before Felix seems to have been equally ephemeral, lasting for less than a century. In 1819-20 it was regilded and the painting cleaned; in 1845, the minutes reveal that the picture was given a new oak frame and rehung in the New Dining Hall of Lincoln’s Inn.

Page from the minutes for the meeting of the Council of Lincoln’s Inn, Trinity Term, 1877 (Lincoln’s Inn Library)

The minutes from 1877 (above) show that, thirty years later, the Council wished to replace this ‘Oak Frame’, and that ‘…on the discovery and production of a Letter written by Hogarth himself on the subject, in which he gives a Sketch for a Frame, the Committee ordered a Frame to be made according to that Sketch.  This has been done by Mr Mucklow, of Princes Street, Leicester Square…’, that is, Alfred J. Mucklow.  The new frame cost £50. 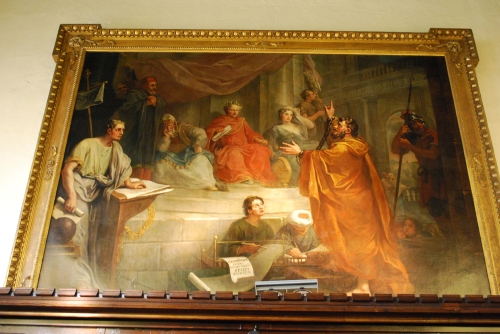 This is presumably the frame we see today on Paul before Felix : a Victorian replica of a William Kent frame, with outset corners, egg-&-dart on the top edge, cable moulding at the sight edge, and rosettes with foliate scrolls in the corners and centres of the frieze. As an interpretation of what Hogarth implied in his sketch it is satisfactory, echoing the classical cast of the painting, restrained, bold and linear, with a touch of richness in the frieze motifs.  It is notable, however, that Gosset’s realization of Hogarth’s design, whilst classical in its underlying structure, does not have outset corners but – according to T.H. Shepherd –  richly scrolling foliate ornament, with a touch of Rococo rocailles. It would be good to think that perhaps, still lurking in some cellar beneath Lincoln’s Inn, is the relic of this more flamboyant original, from the hand of the King’s framemaker. 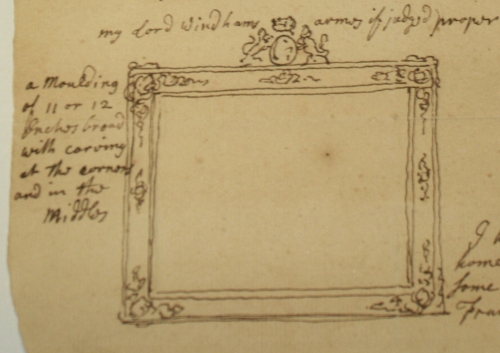 All images of documents by kind permission of the Masters of the Bench of the Honourable Society of Lincoln’s Inn.

Jo Hutchings, Archivist, and Frances Bellis, Assistant Librarian, have been outstandingly generous with their time and their help, together with Murray Campbell, Assistant Under Treasurer, who photographed  the relevant documents.

The National Portrait Gallery’s Directory of British Framemakers, 1630-1950, at www.npg.org.uk/research/conservation/directory-of-british-framemakers.php, provides information on both Gosset and Mucklow.