This rather esoteric and very focused British superhero appeared on the scene early in spring last year (2015). He began his activities on 2nd April, apparently out of an aesthetic and altruistic wish to improve the environment of Teddington, a remote hinterland in the region of Richmond, on the outskirts of London.

On 9th April, he burst out onto Twitter and Facebook, a fully-formed avenger with travelling toolkit, benighted costume and mask, dedicated to enhancing the street furniture of his neighbourhood. 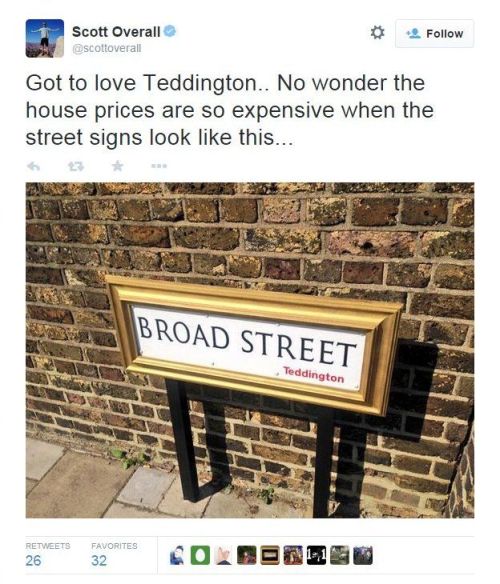 He was quite catholic in his approach: road signs, notices in parks, cycle route signs, parking instructions, railway station maps, instructions on removing dog excrement – any sort of sign which could be improved by a (usually gilt-finished) frame was grist to his mill.

He operated, like the best superheroes, under the cover of darkness, having nefariously measured the signs previously and created the frames in his Batcave. Obviously superheroes aren’t necessarily popular with authority, but they do quickly build up large fanbases; and while the Phantom Framer wasn’t (to begin with) in favour with Richmond Council, he was soon very popular with his parishioners. 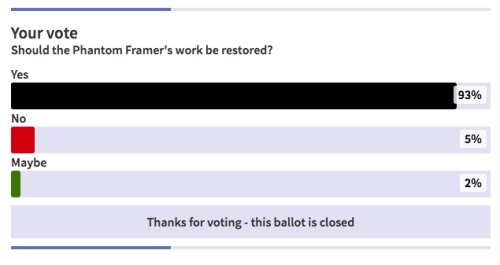 The Council started to remove the frames, as they didn’t fit into its ‘corporate signage policy‘ ; this was swiftly followed by a petition to restore them, signed by more than 800 people, and the Council quietly shuffled the ‘signage policy’ into a dark corner. It has since stated that,

‘ While not condoning the practice [of framing road signs], the London Borough of Richmond upon Thames has taken a light touch response and is only removing the frames if on regulatory signs or where they are adjudged as being unsafe, unsightly or otherwise problematic’.

Every superhero attracts his supervillain, however, and a ‘de-framer’, christened The Grump, started removing the frames him/herself… Sadly, no portrait of this Joker is as yet available, and in any case he/she was soon followed by an informal vigilante group, Guardians of the Frame, who retrieved any victims of The Grump and restored them to their creator, being awarded with a (framed) certificate for their efforts.

Just like Banksy’s, although on a somewhat smaller and more localized scale, the Phantom Framer’s work began to pop up all over Teddington, and tweeted images of it proliferated. He was a Robin Hood figure – the kind of friendly, outré, fluffy anarchist whom the English love to love – and his story went around the world. His public signage policy was easy to approve; it was fun for children to find, it cheered up the rather drab and frequently authoritarian signs, it cast a louche glamour over Teddington, and it added to the general gaiety of life. 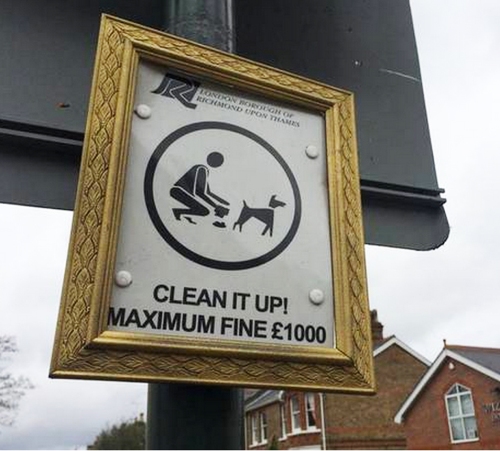 By 18th April, the BBC had run a piece on him, in which he admitted to 25 acts of ‘middle class vandalism’, and Banksy’s biographer, Will Ellsworth-Jones, was asked for his opinion of the frames. He said,

‘I think they are great, and I think it follows on a tradition of artists using one thing and turning them into another,’

adding that they also show up the ‘dreadful typography’ of the road signs themselves. This news got as far as Greece… 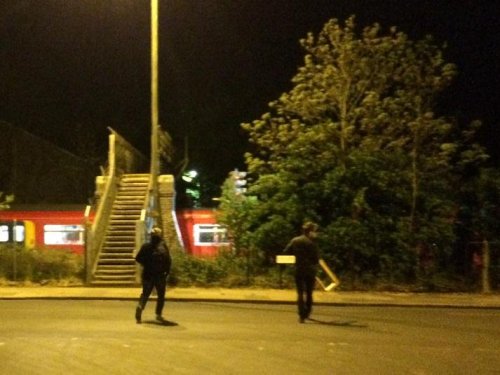 On 22nd April The Phantom was interviewed on ITV news, where he turned out to be two phantoms working in concert, or one Phantom and his Robin, perhaps.

They stated that they ‘… just wanted to add a bit of style and a bit of colour to people’s lives’; they would like to make their area more beautiful, and inspire others to do the same. This interview appeared in The Independent the next day, where their quote was expanded:

‘We’re just here to brighten up people’s lives. Add a bit of colour to things and make people aware of their surroundings and Teddington’s a fantastic area to live in. But sometimes people walk down the streets with their heads down and they don’t realise how beautiful their local place is,’ explained one of the Phantom Framers.

While the other added, ‘Another reason was to demonstrate the craft of framing and to prove that anything in a beautiful frame can be beautiful, even if it’s something very mundane that you may pass a hundred times without looking at it.’

A short documentary on them (or him) was made by Rhodri Williams, in which they affirmed their wish to remain anonymous ‘..or the bubble might burst’. A Google maps page was added by ‘Google’s Geospatial Technologist’, Ed Parsons, so that you can see where the Phantomly Framed signs are, and from whence they have been removed.

Somebody even adapted one of the frames to a decorative scheme he or she must have decided was more sympathetic to its surroundings, altering a spray-painted royal blue and gold frame to plain silver with coloured sequins, in a neat approximation of the process played by fashion, time and art movements in the reframing of Old and Modern Masters. 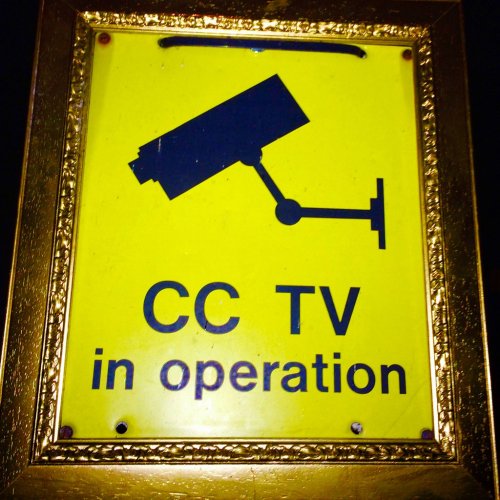 In spite of the perils of the job, for some weeks nobody seemed to know who the Phantom Framer was – but they were vastly interested in him and his work; even in Japan. 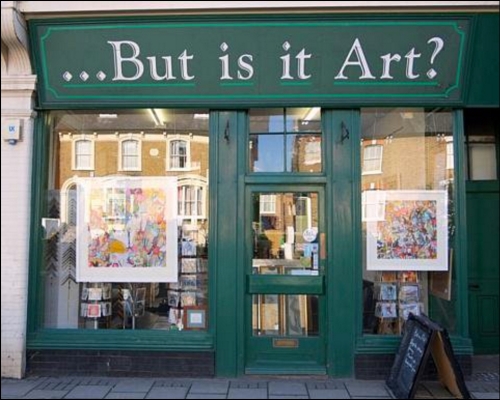 However, his Phantomness was developing cracks; links proliferated to a picture-framing shop in Teddington called …But is it Art?, and the Richmond & Twickenham Times broke the news that that, far from being a single superhero (or even two of them), he was actually a trinity, who had thought of the idea in the pub (as one does), the idea being ‘to give art back to Teddington’:

‘We never realised what a hit it would be; we were really chuffed to get in the Richmond and Twickenham Times.

‘Then suddenly we were on a blog in Japan, on Der Speigel in Germany, we have been featured on websites in Israel, Greece, Jamaica and Japan, as well as the national news in the UK.’

So life went on for a bit, with the frame-blasé inhabitants of Teddington occasionally complaining that the gilt was wearing off their signs.

In September 2015, possibly energized by holidaying with other superheroes, The Phantom Framer seemed to take on a new lease of life. An arbitrarily free-range frame was installed on chains hanging from a tree in the local park, so that you could acquire your own framed self-portrait, landscape or flowerpiece with the ease of an 18th century Grand Tourist calling up a carver to work on his Batoni, Canaletto or Ligozzi.

He (or they) also began to penetrate into the wider landscape, striking in the centre of central London[1], at Lexington Street, Soho, and Jubilee Gardens on the South Bank – only this time they took ITV News along with them, as well as a partner in art: another superhero whom they had acquired along the way. This exploit was picked up by FranceTVInfo (Le Fantôme Encadreur), the Evening Standard, and the MailOnline.

However, simultaneously with this flurry of publicity came the interview on Campaign with an Ed Morris, the creative director of the British wing of Leo Burnett, a ‘globally active advertizing agency based in Chicago’, notorious for its stunts. Here he revealed that he was the Phantom Framer, and that he had organized the whole thing to ‘showcase the craft’ of the picture framers, and to prove that ‘anything looks great in a frame’; also ‘to run a social campaign’.

He has, however, changed his LinkedIn profile to give full emphasis to his new superheroic career, whilst on his website he reveals the full story of his exploits, including the fact that, when attention dropped off in early May 2015, he gave it a boost by revealing the shop behind the frames.

‘Nearly 3,000 people follow us on social media. The press coverage we got in Teddington, London, nationally and abroad has been phenomenal and reached many thousands.  A campaign run single handedly has been a success way beyond my expectations and an absolute blast to run, and our ambitions continue to grow…’ 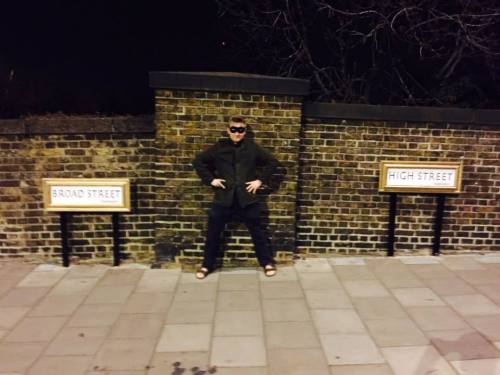 Is this profoundly cynical, rather than altruistically Batman-like? or is it an eccentrically-English adventure, which brightens people’s lives and just happens to have a small and inoffensive publicity campaign attached? Whatever you think of it, it couldn’t have worked without the significance of a gilded picture frame having wormed its way deep into everybody’s imaginative vocabulary. It’s just like comedy, which operates through the reversal of expectations, followed by repetition and/or audience participation.

With thanks to Rhodri Williams.

[1] The actual centre of London (and the rest of the universe) is Trafalgar Square, from which all distances are measured, and which took over from the omphalos of Delphi somewhere in the 17th century.

5 Comments to “The Phantom Framer”