Never Apart: Frames and Paintings by the artists of Die Brücke

On 15 November 2019 an exhibition opened in Berlin on the artists of Die Brücke and their frames. It comprises work by Ernst Ludwig Kirchner, Karl Schmidt-Rottluff, Erich Heckel, Emil Nolde, Otto Mueller and Max Pechstein, in the original frames designed by the artists. Like the Pre-Raphaelites, Die Brücke thought of frame and painting as one indivisible work of art, the function of the frame being the link which bound the painting to the interior where it hung. However, unlike the PRB, who used symbolism and decorative geometry to present their work, these were 20th century artists, who turned to the archaic past for inspiration.

Here, for example, is Karl Schmidt-Rottluff’s Head of a woman with mask, which shares Picasso’s enthusiasm for early and tribal objects – and, just as the painting returns to Cycladic sculpture and tribal masks for its origins, so the frame suggests its source in the wave and ripple ornaments of 17th century German ebony frames by the rough undulations cut into its surface. Other frames have the flat profile of a 15th century Netherlandish frame, with vertical or horizontal butt-joints rather than mitres, and finishes which include gilding, staining and roughly colouring directly on the surface of the wood, so that – as with many Pre-Raphaelite frames – the texture of the visible grain looks back to a more primitive (perhaps a more honest) use of the material.

Curated by Werner Murrer,  this is a pioneering exhibition on the work of a group which saw the image and its frame as a synthesis – the Gesamtkunstwerk. It remains at the Brücke Museum in Berlin until 15 March 2020 and then moves to Buchheim Museum (28 March-5 July).

This is not the evocation of an abstract sculpture, but the description of the carved frame on Karl Schmidt-Rottluﬀ’s 1910 painting Village Corner. While the terms used are not particularly familiar to us, they also allude to the fact that writing and speaking about frames in the customary vocabulary of art history is not easy. Discussing frames is unusual and poses a challenge. When visiting an exhibition, few viewers consciously look at the frames, and the images on postcards or in exhibition catalogues are usually shown unframed – or the frames are cropped in the photos. Yet the frame is not just ubiquitous, it has an important function for the artwork: it acts as an intermediary between the inside world and the outside, it creates and demarcates the boundary between the art and the interior where it hangs, and it upgrades the object by designating it a work of art.

The Munich-based framemaker Werner Murrer has been dealing with antique frames for three decades now, focusing especially on those patterns used by the Expressionists. Along with his team, he wishes to highlight the previously neglected history of these frames, and to do this, has pursued his research beyond the beaten tracks of art history and museums. The members of the artists’ group Die Brücke, founded in Dresden in 1905, aimed to revolutionize art: they looked for new ways to work and live outside bourgeois conventions, hoping in the process to dissolve the boundaries between art and life. 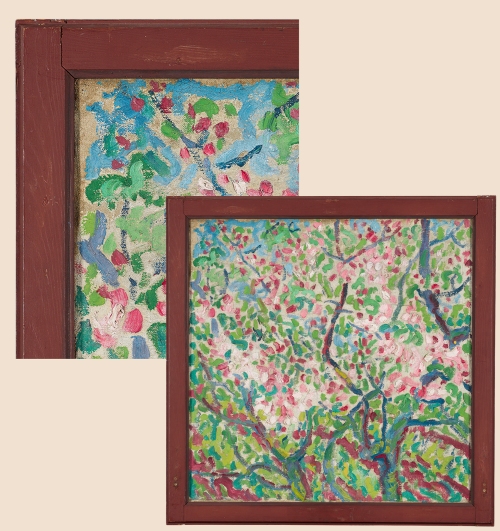 The founding members – Fritz Bleyl, Erich Heckel, Ernst Ludwig Kirchner and Karl Schmidt-Rottluﬀ – had all studied architecture, and shared a strong interest in spatial concepts and in the idea of craftsmanship. With the Gesamtkunstwerk in mind, they constructed the frame as an integral part of the painting – one which also connected the painting to the surrounding room – designing the frame as part of the work of art from the very beginning. The artists of Die Brücke considered the frame as one element of the whole, requiring their attention as much as all the other elements of the three-dimensional object. A quote from a letter sent by Kirchner to his patron Carl Hagemann makes this clear:

‘I would like to draw some designs [of frames] for you. I believe that a green-gold looks best around the paintings in all cases; anyway, the frame must also harmonize with the interior’ [1].

A little later, Kirchner had to explain a delay to Hagemann, as he was still exploring the problem:

‘I am working on it, but without the paintings it’s bloody difficult. Very simple corners and very black and wide. 12–15 cm.’ [2].

This reveals how important the unity of frame and painting was for the artists of Die Brücke.

The project Never Apart: Frames and paintings by the artists of Die Brücke is a cooperation between Werner Murrer, the Brücke-Museum in Berlin, and the Buchheim Museum in Bernried. The joint focus of the two exhibitions is on what happens around the paintings. For the Brücke-Museum, analyzing the topic of the frame led to an in-depth examination of its own collection, which revealed a great number of original artists’ frames – a circumstance of which the museum had previously been unaware. With numerous paintings in their original frames from both institutions, as well as a great number of items on loan from sources in Germany and abroad, and supporting documentary material, the exhibition now presents the broad spectrum of Die Brücke frames for the very first time.

Ernst Ludwig Kirchner, Karl Schmidt-Rottluﬀ, Emil Nolde, Max Pechstein, Erich Heckel, and Otto Mueller all designed frames especially for their paintings. The example which Kirchner is describing above can be regarded as the prototype of an Expressionist frame: the so-called simple Bretterrahmen (plank or plate frame), preferably in black, without ornamentation or an elaborate profile, made of plain lengths of wood, sometimes wider and sometimes narrower. However, the artists also used slightly more complex frame profiles, with added carved ornaments – for instance, the frame for Schmidt-Rottluﬀ’s Village Corner in the Brücke-Museum collection (at the top of this piece). They often painted their frames in one or more colours, in order to create a compositional union with the painting, transforming the frame into an integral part of the artwork in question. 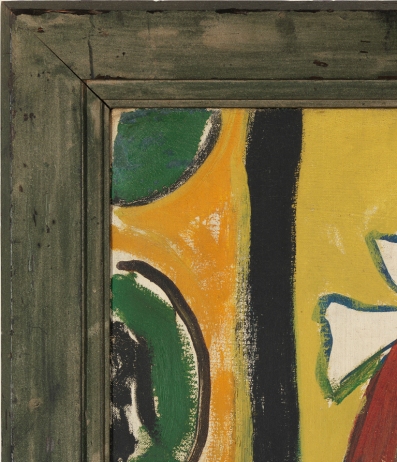 Kirchner’s painting of his young model Marzella (dated 1909–10) – on loan from Moderna Museet, Stockholm – has been framed in a greenish bronze hue which echoes the colour of Marzella’s hair and of the prominent contour lines. Like the flat areas of colour in the painting, the frame has been roughly painted with broad brushstrokes. Despite Expressionist art – and that of Die Brücke in particular – being very well researched, the frames of this group have been mostly neglected until now.

1931 retrospective exhibition of the work of Otto Mueller, following his death in 1930; Alte Nationalgalerie, Kronprinzenpalais, Berlin

Never Apart… is intended as a prelude and a beginning. As the first exhibition on this theme, it aims to open the eyes of the spectator to the aesthetic of the frame and its relationship to the painting, and to create a new awareness of this important area. Up to now only conservators and framemakers will have been familiar with these original artists’ frames, and the terms for describing them (such as plate or torus frames), but the exhibition wants to awaken the interest of a wider public to the subject.

The author is assistant curator at the Brücke-Museum.

Although the second showing of the exhibition  at Buchheim Museum, from 28 March to 5 July, was sadly closed by the coronavirus epidemic, the half-hour film by Sebastian Eschenbach, produced as a part of the exhibition itself, has now been issued. It follows Werner Murrer, who explains his interest in and enthusiasm for the frames of Die Brücke  artists, and his search for original frames both on the paintings and  those which have become separated from them over time.  He visits Kirchner’s summer cabin on the Stefalalp, and the Kirchner Museum at Davos; Buchheim Museum; the Galerie Henze & Ketterer, Wichtrach; and the Nolde Foundation in the artist’s house in Seebüll.

A comprehensive catalogue will be published to accompany the exhibition.