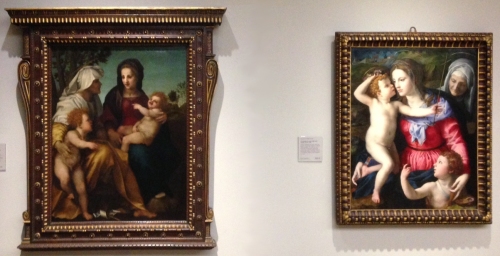 The first two of these are works by Mannerist painters, which hang side by side in the Gallery, and they have been set into two extraordinarily beautiful and powerful Mannerist frames. Mannerism is usually best described as a subversion of classical idiom, in which the artist, craftsman, architect or designer plays games with the conventional proportions and motifs which characterized art during the Renaissance. Although it’s a term which was first applied to painting (earlier, in the work of Andrea del Sarto and Michelangelo; later in work by Pontormo, Bronzino, Coreggio, etc.), and emerges as a style in the late teens and early twenties of the 16th century, it’s also applied to the tricks of design played in buildings, furniture and picture frames. 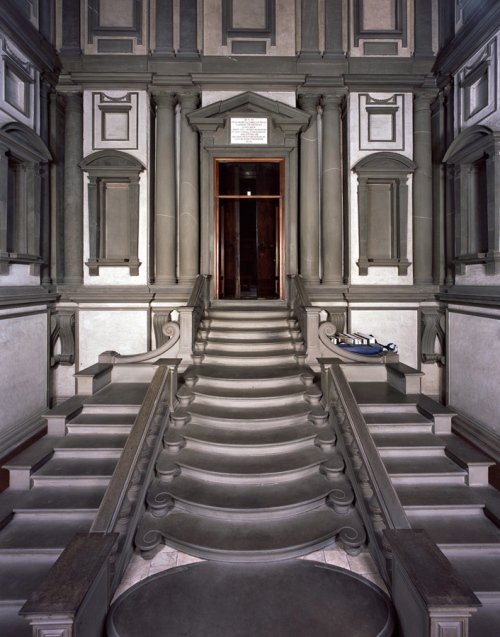 Michelangelo, vestibule of the Biblioteca Medicea Laurenziana, 1524-34, and subseq.-1571

The earliest example of a fully Mannerist building is probably the Biblioteca Medicea Laurenziana in Florence, designed by Michelangelo in the 1520s and incorporating many innovative twists on classical proportion and motif. The stretched silhouettes, tapering pilasters and enlarged pediments of the wall niches, as well as the scrolling ends of the steps and massive volutes above the half-landing, would all become characteristic of Mannerist frames. 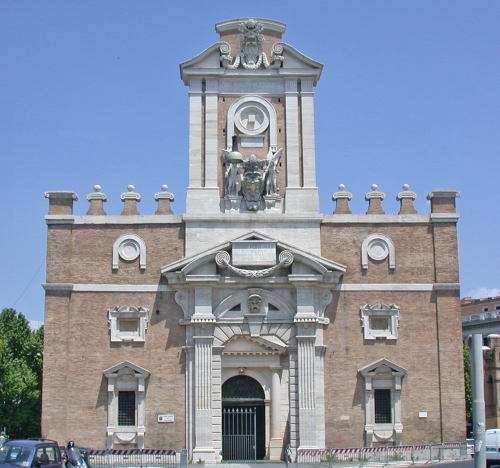 A much later design by Michelangelo for the Porta Pia in Rome provides a stylebook of Mannerist patterns. The blind windows on the second storey have outset corners, the ground storey windows are emphatically elongated, with exaggerated modillions or brackets supporting them, and the massive triple height portico is crowned with a lunette, open swan’s neck and triangular pediments.

The portico by itself sports an accretion of motifs: the elongated supports of the upper pediments (plain triglyphs), with their large row of guttae, or pendant ‘raindrops’; the gigantic S-scroll volutes behind them, against the wall; the tight, concentric scrollings of the swan’s neck pediment and the enlarged bay leaf swag which joins them – all highly subversive deformations of the classical orders.

Here is an example of an original Mannerist frame on a school of del Sarto work in the Innocenti, Florence; this can correctly be described as a tabernacle frame, since it has a vestigial apron at the bottom and can thus only be wall-mounted. The replacement of columns or pilasters by fluted drops ending in pendant tassels; the S-scrolls at the back edge; the studs on the frieze, fluted cornice and parcel-gilded finish: these are all elements which play further games with features purloined from Mannerist architecture, in a joyous visual equivalent of joke and pun.

The new frame on Andrea del Sarto’s Madonna & Child… is similarly created from a gallimaufry of visual games. It is as completely appropriate to the style and period of the painting as, for instance, the classical aedicule of the Frari Triptych is to Bellini’s work. The frame was acquired in Italy, and is unaltered. It is parcel-gilt walnut, a typically Mannerist finish, and some of the gilding is original. The design is based on a conventional aedicule, but the innermost moulding has taken over the frieze and supporting mouldings from the lower part of the entablature, becoming (as it were) a cassetta frame with attached cornice, base and pilasters. The pilasters in their turn have spun into S-shaped volutes, and their capitals and pedestals have slimmed into long, lean bars ornamented with piastre mouldings. Other Mannerist motifs include the gilt flutes on the cornice and at the sight edge: the latter provides an element of perspectival recession and focal emphasis for the painting; also the enriched studs on the frieze.

This is a superb and beautifully-preserved frame, which retains the original hanging device on the back. It was also miraculously exactly the right size for the picture, and is both a significant addition to the National Gallery’s increasing collection of period frames, and a notable improvement in presentation of the work it now contains. It hangs beside Bronzino’s Madonna and Child…, which has also recently been reframed in a Mannerist design. 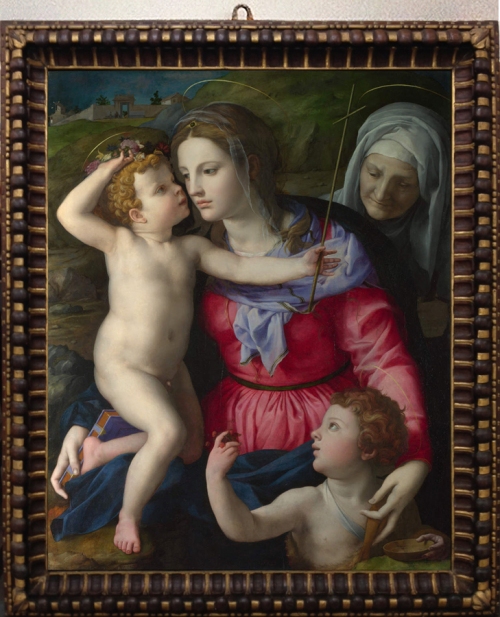 This is an example of a Tuscan Mannerist architectural moulding frame; it plays on the enlarged hooks and flutes found in designs by the architect, Bartolomeo Ammannati, and (for instance) in the frame of Bronzino’s Portrait of Giovanni de’ Medici in the Ashmolean. Once more, it’s of parcel-gilt walnut, a combination which emphasizes the already prominent scoops and knulls of the main fluted ornament. Like the more subtle fluting at the sight edge of the del Sarto frame, this is primarily a focusing and an optical device; in other words, it grabs the spectator’s attention, and also provides an enhanced perspectival recession into the painting.  Since Bronzino’s figure composition is (like many Mannerist paintings) set in a very shallow space, with a distant background and no middle ground, this recessive trick actually creates a tension between painting and frame – another trait of Mannerist ornament (see also an earlier post ).

An extraordinary bolection version of this dynamic style frames Pontormo’s Portrait of a halberdier, 1528 .  Such frames would have helped paintings to stand out from the opulent interiors of painted decoration, panelling or coloured marbles where they originally hung.

Like the new frame on the del Sarto, that on Bronzino’s Madonna & Child… has its original hanging device: in this case it can be seen rising above the top of the frame. It was acquired in Germany, and, again like the other frame, is unaltered and exactly the right size for the painting it now contains. Even better, it creates a relationship with the Mannerist aedicule on the del Sarto similar to those which would have existed in hangings of the period, a great bonus for any gallery, and a reward for the meticulous trawling for suitable frames which has to be undertaken in order to make such acquisitions.

Both works are at the moment (June 2014) hanging in the newly-renovated rooms beneath the National Gallery. They are, in fact, together within one very striking space devoted to Mannerism, having been arranged on the left of Michelangelo’s large Entombment (c.1500-01), in its monumental painted and parcel-gilt aedicular frame of the 1570s, and his Virgin & Child with St John & angels (the so-called ‘Manchester Madonna‘ of c.1497).  The latter has a parcel-gilt Florentine frame, also of the 1560s-70s, with a wide frieze of raked and centred stopped-channel fluting, and an acanthus leaf top moulding. These four paintings together form an eye-catching and theatrical salute to Italian Mannerism on a single wall; but – even better – they are supported on the facing wall by works  by Bacchiacca and Pontormo. Amongst these Pontormo’s Joseph with Jacob in Egypt (c.1518) stands out: it has a handsome parcel-gilt bolection frame with stopped-channel fluting on the top edge and a leaf-tip at the sight.

The National Gallery’s third new setting is another Italian walnut frame, this time Baroque in style, and married to a Baroque work by a German-born artist. Liss was, however, nothing if not pan-European. He was trained in Haarlem, Amsterdam and Antwerp, before moving to Venice via Paris, and then on to Rome, where his Judith… was probably painted. What better design to display it than a 17th century cassetta frame with a reverse or bolection profile – i.e. with the highest moulding nearest the sight edge, pushing the painting out from the wall towards the spectator? This thrusting style, with an emphatic difference of height between the back and sight edges, and a consequent opposition of highlighted moulding and strong cast shadow, complements perfectly the dramatic knot of opposed limbs and the swirling composition, as well as the contrast of light and dark in the painting, so characteristic of Baroque art. This frame may have originated, like the picture, in Rome, making it particularly appropriate for Liss’s work. 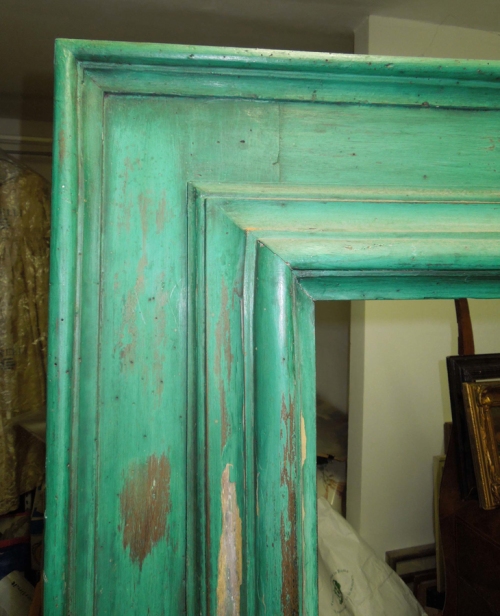 Liss walnut reverse cassetta veiled in green paint; note the butt joint across the frieze at the top

Happy discoveries are not, however, always straightforward; this beautiful wooden frame with its handsome grain and patina was concealed when it was found beneath a layer of pale viridian paint. Fortunately wood, especially a hard wood like walnut, can be relatively easily restored. This is not always the case with, for instance, gilding; often an original surface has to be regilded, simply because it’s not possible to remove whatever layers have been applied on top without removing the gilding, too. The walnut frame on the Liss, however, has been expertly restored to its original finish; and both Mannerist and Baroque collections at the National Gallery have been greatly enhanced by these three frames, which have found their perfect partners.

With thanks to Peter Schade of the National Gallery for providing the images and information used in this article.