The frame as a vehicle for symbol and significance

The historical novelist, Lynn Shepherd, considers the role of the frame in 18th century portrait painting…

‘Thy pictures shall thy conduct frame

Consistent still, though not the same’:

Eighteenth-century families and their frames

I’ve always loved portraits, especially eighteenth-century family portraits. There’s something fascinating about the way that family relationships are presented in these compositions – the way the network of kinship, affection, and power is articulated by the visual composition of the figures on the canvas. Sometimes that’s by presenting the family in a triangular template, with the husband or father at the apex, as in Arthur Devis’s portrait of the James family below: 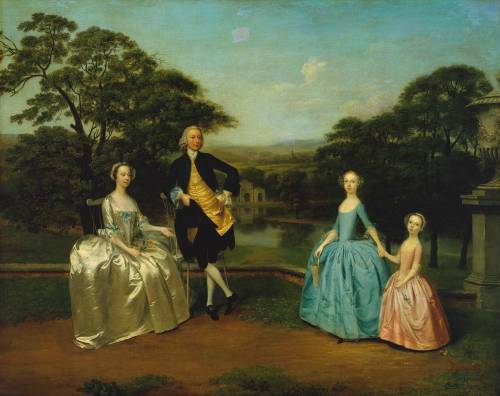 Or it can be by showing the relative (in both senses) importance of age and gender by a left-to-right composition in which degrees of distance equate to degrees of significance. In this Gawen Hamilton picture of the Wentworth family, for example, example, the father is seated at the far left, next to his son, and their dynastic consequence is marked by the candelabra suspended between them. The Wentworth women are then arranged on the right, with their relative age and status indicated by their distance from the principal axis of father and son: 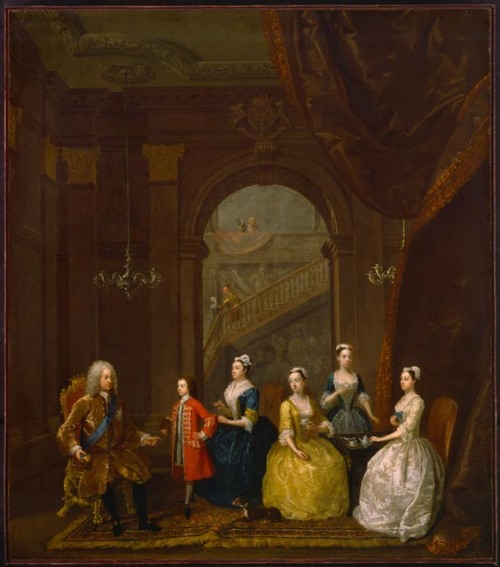 One of the other fascinating things about these portraits is their use of frames. Aristocratic family portraits were often hung together in a gallery, in one of the areas of the house that was made available both to personal friends, and members of the public who could visit the house when the family was away, just as Elizabeth Bennet visits Pemberley in Pride and Prejudice. Elizabeth famously begins to change her opinion of Darcy when confronted with his portrait in the family gallery, so well does it convey both his likeness and his character:

There was certainly at this moment, in Elizabeth’s mind, a more gentle sensation towards the original than she had ever felt in the height of their acquaintance. The commendation bestowed on him by Mrs Reynolds was of no trifling nature. …Every idea that had been brought forward by the housekeeper was favourable to his character, and as she stood before the canvas, on which he was represented, and fixed his eyes upon herself, she thought of his regard with a deeper sentiment of gratitude than it had ever raised before; she remembered its warmth, and softened its impropriety of expression.

It’s quite likely that Darcy’s portrait would have been framed in a very similar way to the other portraits hung alongside his own. Presenting a dynastic line in portraits of a similar size and frame was in itself a powerful message about uniformity and continuity from one generation to the next.

This is one of the subtler uses of the frame in eighteenth-century portraits, but in other portraits the frame plays a far more intrusive and overt role. The design of the frame may convey a particular meaning about – or identity on – the sitter, perhaps by incorporating heraldic emblems from their family crest, or using maritime devices to signify a naval family. Or it may use symbols which would have had a wider emblematic significance: in this portrait of Alexander Pope the frame is formed of a serpent with its tail in its mouth – an ouroboros like this was a symbol of eternity, and signifies here the poet’s claim to lasting fame. 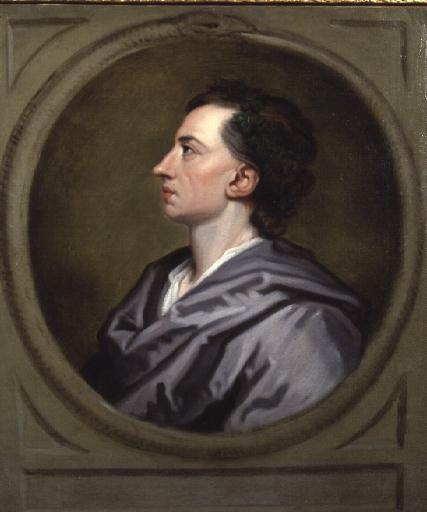 The frame can also be one of the key ways in which the artist can emphasise the ‘theatricality’ of the portrait. Instead of drawing us in and making us believe that we are inhabiting the same space as the subjects of the picture, an ornate or elaborate frame can deliberately break down that illusion, and emphasise the essentially artificial nature of any painted representation.

In the portrait below by Thomas Bardwell of the Broke and Bowes families, for example, the ornate shape of the ‘outer frame’ is deliberately echoed in the empty ‘inner frame’ depicted at the centre of the portrait. This may be a playful visual conceit suggesting that the family has already made a space for the portrait Bardwell is painting of them (a variant on the mise en abîme idea in which an image contains a smaller representation of itself, retreating into infinity).  Or it may be that the painting is actually unfinished, and Bardwell intended the inner frame to hold a ‘portrait within a portrait’ of Martin Bowes, whose widow sits at the table. Such a composition would allow Bowes to retain his literal and metaphorical ascendancy over his assembled relations, long after his own death. 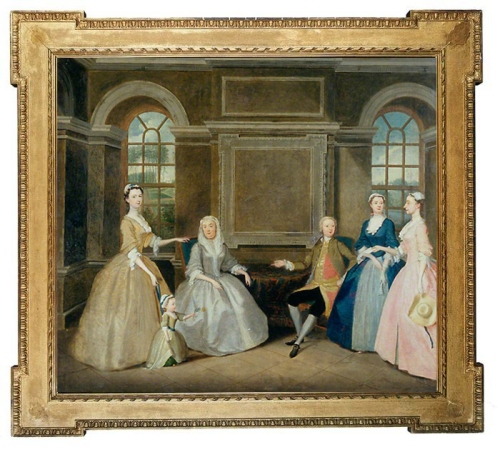 Thomas Bardwell, The Broke and the Bowes families

Paul Duro, ed., The Rhetoric of the Frame: Essays on the Boundaries of the Artwork

Michael Fried, Absorption and Theatricality: Painting and Beholder in the Age of Diderot

Lynn Shepherd, Portraiture, Illustration, and Representation in the Novels of Samuel Richardson (chapter one)

Lynn is also the author of Tom-All-Alone’s, which is available in paperback in the UK from Corsair from September 6th. It’s published in the US by Random House under the title The Solitary House. Her first novel, Murder at Mansfield Park, is available as an e-book from Corsair. Lynn’s website is www.lynn-shepherd.com, and her Twitter ID is @Lynn_Shepherd