Alastair Johnson, frame conservator at Tate Britain, describes the process of restoring one of the largest Pre-Raphaelite frames in line with the artist’s original conception, ready for the exhibition:  Pre-Raphaelites: Victorian Avant-Garde at Tate Britain (12 Sept. 2012 – 13 Jan. 2013)

One of the pleasures of working with a great collection such as Tate’s is the sheer range and scale of the picture frames – particularly 19th-century compo patterns, which illustrate the technical and creative advantages of mass-produced applied ornament. In common with many frame conservators working in large collections, I have a personal list of desirable projects drawn up, in the hope that one day I may get my hands on a particular frame; one of these is the centrepiece of the Tate Pre-Raphaelite collection – the majestic  frame of Burne-Jones’s King Cophetua and the Beggar Maid (1884)[i]. 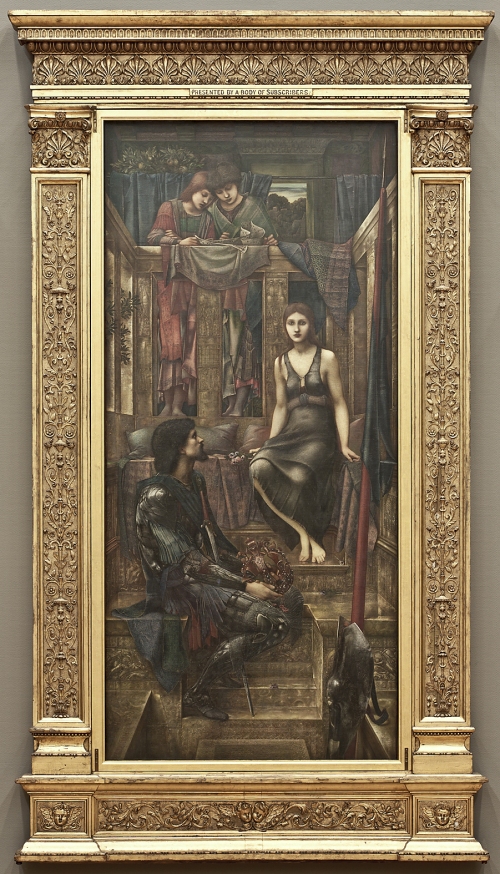 Burne-Jone, King Cophetua and the Beggar Maid, 1884, Tate before conservation of the frame

Because of the work’s popularity and its large size it is rarely absent from view at Tate Britain, and it has hitherto been difficult to argue for sufficient time for conservation treatment, until recent building works fortuitously combined with a important Pre-Raphaelite exhibition to make this possible.

You need a bit of luck on all fronts. Ten years ago I had been introduced to Burne-Jones’s frames through an article in The Burlington Magazine, which included both a description and photograph of the Renaissance-style aedicular frame around King Cophetua taken by Emery Walker at Burne-Jones’s Memorial Exhibition in 1898.

I knew that this highly detailed photograph pre-dated the Tate acquisition, and also that the structure of the frame in Walker’s photograph differed from its current state: in simple terms, a removable glazing door had been cut into the frame at some point after 1898. Burne-Jones preferred his work to be glazed , and this is apparent in the photograph; however, I suspect that the dangers of moving such an enormously heavy frame around the Millbank galleries led to a structural alteration, allowing the plate glass (in its own separate frame) to be added and removed from the main frame whilst in situ on the wall, a common practice with large works in the Tate collection.

Comparative details of frame in 1898 & 2011, before conservation showing original sight edge v. insertion of glazing door (also the crack in the right-hand pilaster)

Introduction of the glazing door came at a cost to the integrity of the original frame, as space for it could only be achieved by increasing both the overall height and width of the main structure. This was done by adding an 8cm ‘brick’ of timber to the base of the pilasters, and by cutting the base section from top to bottom through the centre, inserting an 8cm-wide continuation of the base section. The original putto head at the centre of the frieze was discarded and replaced (rather creatively) with a pair of rococo putti, the remaining original pair of wings now too far apart to act for one. If you didn’t notice the two lines of cracks running vertically through the base you might have puzzled at the stylistic aberration of the heads on either side of the base and the pair cuddling up in the middle. More importantly, the original ornamented sight-edge was removed in its entirety, resulting in a disjunction between the glazing door, the edge of the painting and the pilasters. Thankfully for the conservator, the entablature was left alone, the pilasters simply pushed further out on either side, although in the process ruining the classical proportions.

The frame was made by the Vacani family of framemakers in London’s Soho, employed by Burne-Jones for more than a decade. I think it unlikely that the Vacanis also carried out the alteration, from stylistic inconsistencies and the quality of the work, but their workshop was in operation until 1911, so it’s theoretically possible.  On the subject of inconsistency, I was later to find during the treatment that water-gilded passages on the base and entablature had been gilded over a red bole and those on the pilasters over dark grey. The base had clearly been re-boled and over-gilded during the alteration, but not the entablature. Evidence of several craftsmen at work on the original construction is confirmed by the markedly different technique of applied and incised decoration of the wings belonging to the extreme left and right putti.

Detail of base of frame from the photograph by Emery Walker

Without Emery Walker’s finely detailed photograph, full restoration of the frame’s original 1898 configuration could not have been attempted, but armed with this invaluable information I was able to plan accordingly. I proposed to reinstate the glazing behind a rebate as shown in the photograph: in effect returning the frame to its massive deadweight. Even using modern laminated glass, the inherent flexibility of the frame’s structure risked glass breakage whenever moved, but the addition of a stiffening structure at the rear of the frame would both destroy its appearance and double its already colossal weight. A solution arrived in the shape of Optium, a 6mm low-reflecting acrylic sheet, manufactured in the USA, and only recently available in a size large enough for the frame. At just over half the weight of 6mm laminated low-reflecting glass (but nearly a third more expensive) and with an anti-static coating, this ticked all the boxes. 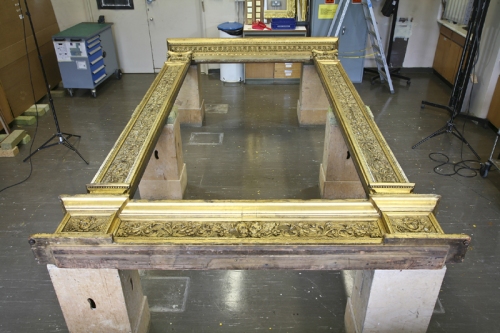 The frame of King Cophetua in the workshop at Tate Britain

For the first two months I poked, probed, measured and drew, trying to understand exactly how the alterations had been made, working out how they might be reversed. The frame breaks down very simply into four lengths. Blind 40cm extensions of the pilasters, at both top and bottom, form half-lap joints that are fixed from behind to base and entablature with steel screws. One of our workshop traditions is the creation of accurate cross-section drawings of whatever frame we happen to be working on. This routine often reveals odd and unexpected previous alterations, provides clues as to how a treatment might proceed, and builds a good in-house working knowledge of many different frame types. Previous alterations generally follow a logic – that’s the expectation; and if they don’t, drawing it all out on paper usually resolves the history.

By November 2011 I had separated the two halves of the base, removed the twin putti and timber insert and rejoined the base in its original configuration. The ‘shadow’ from the original single putto’s head suddenly appeared: moments like these are hugely encouraging! A new single head was cast from the putto on the right, together with modelled additions to the wings. Right and left putti are very slightly different, so choice of the right was arbitrary, as the 1898 photograph shows that all three may have been pressed from separate moulds. There’s also a mischievous detail about the right-hand putto’s pupils: they were modelled to make him cross-eyed. Those on the left side are ‘normal’. I decided to remove the pupil detail altogether from my replica, making the face more mask-like.

Detail of frieze at base of frame after conservation

A missing sight-edge can usually be sourced from another frame. I had a fair idea of what it had been, but drew a blank amongst extant Burne-Jones frames, so I modelled several prototypes in wax from enlargements of the photograph, casting off lengths in plaster to be joined end-to-end to form the new rebate.

Nearly every external edge and corner had received a large amount of wear, impact damage and in places, considerable loss. An object of this size is a problem to move – even today – and requires a skilled team of eight people. To get it on and off the gallery wall you need a forklift and a pair of elevating platforms on each side to ensure that it doesn’t topple over on the way up. Frames like this perform, and to some extent are constructed, like a piece of stage scenery; quite literally, as some of the original construction is crude and basic, and the quality of the materials sometimes of low standard. Hence the longitudinal split down the length of the right-hand pilaster, and the split across the base frieze – now filled and carefully disguised. The beginnings of these splits can just be seen in the Emery Walker photograph, confirming that unseasoned timber had been used. One very visible casualty of the split down the pilaster was the applied composition of the exquisite candelabrum ornament. Where this crossed the split, much ornament was missing – not helped by being adhered to a delaminating whiting layer already weakened by a background of punchwork.

As I write, the work is about to be hung in the Pre-Raphaelites: Victorian Avant-Garde exhibition opening at Tate Britain on 12 September. Tomorrow I shall anxiously escort it the short but perilous distance between studio and gallery, watch every corner and edge as it’s raised to the vertical, and finally secure it to the wall. Such a large work has been impossible to view properly in the studio, let alone with the painting fitted, so I am praying that little if any corrections will be required to the overall appearance – although there will undoubtedly be a prolonged period of letting go of such a wonderful project.

The London exhibition ends 13 January 2013, travelling to Washington, Moscow and finally Tokyo. King Cophetua, due to limitations of size, will remain at Tate, going into temporary storage until May when it returns to take prominent position in the main Tate Britain galleries once again.

I am indebted to the article Burne-Jones’s picture frames, published in The Burlington Magazine, June 2000.

The National Portrait Gallery not only holds the Emery Walker Archive (including the 1898 photograph of King Cophetua) but has devoted part of its website to the study and conservation of picture frames. I am particularly indebted to Jacob Simon’s Directory of British Framemakers, 1630-1950, a mainstay of research into our frames at Tate.

All photos of the painting and frame from 2011 onwards, courtesy of Tate, London

Love in the frame: the portraits & frames of John Brett > here

Poetry & the frame: May morning on Magdalen Tower > here