Frames at the Yale Center for British Art

Matthew Hargraves, Associate Curator for Collections Research and Head of Collections Information and Access at Yale, considers the task of cataloguing the YCBA’s collection of picture frames, and making it available online…

Since 2009 the Yale Center for British Art has been working on a major project to survey its collection of over two thousand historic frames. Working closely with two frame historians[1], the Center has now made over 1300 of those frames available online as a distinct collection, and allows images of the frames to be downloaded for any use without licenses or other restrictions. The Center anticipates being able to offer its entire collection online by the end of 2013.

The purpose of the survey is twofold. First, to have a better sense of the Center’s frames which represent an often-overlooked decorative arts collection. The survey has already highlighted frames of outstanding quality and exceptional rarity, such as the pair of provincial Rococo frames for landscapes by James Lambert of Lewes, or the magnificent trophy frames for Sawrey Gilpin’s pair of Gulliver paintings. Second, frames themselves have a history, as do the relationships between painted objects and their frames, but those histories cannot be told without access to the frames themselves. By making its frame collection accessible online the Center hopes that it will support burgeoning scholarship in this area and help promote interest in the study of frames more broadly. 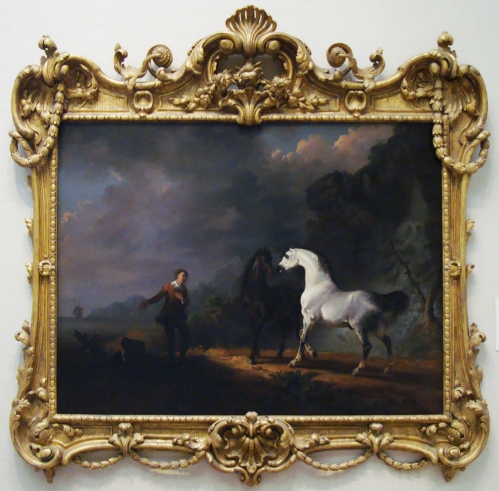 In recent years art historians have become increasingly sensitive to the relationship between the frame and the painted object, and to the material and philosophical issues surrounding notions of the frame. Ever since the rise of single-point perspective and Alberti’s description of the painted field as an open window, this notional window has needed a suitable frame to mark the space between the viewer and the representation. As Meyer Schapiro put it, the frame became a “finding and focusing device placed between the observer and the image.”[2] As such, the frame serves to “accent the depth of simulated space” as much as to convey “the idea of the preciousness of the work of art.”[3]

Despite the important role frames play in this system of representation, they have scarcely been noticed in most art historical writing, especially non-integral frames of the kind found chiefly at the Yale Center. Here the influence of Kantian aesthetics has been profound. In the Critique of Judgment (1790) Kant denigrated those artful ornaments that are “used as a golden frame is used, merely to recommend the painting by its charm, it is then called finery and injures genuine beauty.” Frames and other such ‘ornaments’ are extrinsic to the work of art. At best, they modestly recommend the true work of art to our attention; at worst, they actively injure our disinterested appreciation of the aesthetic object itself.

It is easy enough to see the lasting impact of this judgment on subsequent art history. The conceptual distinction between the work of art and its frame has led to frames being treated as accidental excrescences with no relationship to the intrinsic qualities of the works of art themselves. One consequence of this attitude is that it is rarely possible to see works of art in their frames outside the physical confines of museums, galleries, great houses, civic spaces or wherever else framed objects now hang.

When framed works of art are reproduced in either print or digital form the frames are almost invariably cropped out, even by auction houses in their catalogues, reinforcing the notion that the frame is simply an ornament that more often than not distracts from our appreciation of the painting itself, and that the relationship between panting and frame is arbitrary, a mere accident of history. This tendency to treat frames as arbitrary ornaments has hindered those interested in studying the history of frames and risks imposing a particular notion of the frame on earlier periods which often recognized no such clear categories. 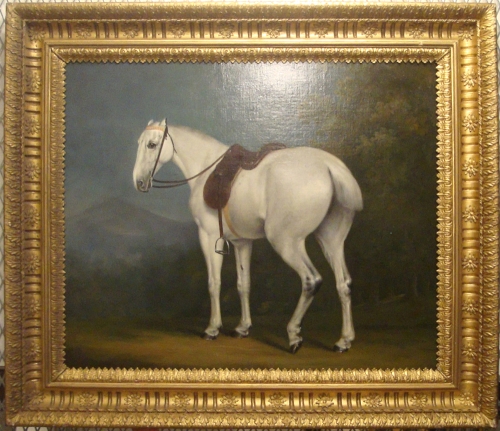 Jacques-Laurent Agasse, A Lady’s Grey Hunter, after 1800, in a rare NeoClassical frame

Fortunately there has been recent interest in challenging this stark Kantian distinction between the work of art and the frame, often in response to the experience of the work of art in which the frame manifestly fails to fall into any neat subsidiary role. Jacques Derrida’s engagement with Kant’s Critique of Judgment has helped shift the focus back towards the frame as both meaningful physical object and as conceptual boundary.[4] Derrida was in part concerned to demonstrate that Kant’s aesthetic defeats itself, for if the autonomous or independent object of the aesthetic can only exist by being distinct from things outside itself, it needs the boundary provided by the frame. And if the aesthetic object is dependent on a frame to be independent, it has no true independence at all. Derrida’s paradoxical account of the frame provides room for subtle distinctions to be made between what lies inside and outside the frame, and forces questions about the limits of the work of art, and these are increasingly being addressed with a recognition that these distinctions themselves have a history.[5] 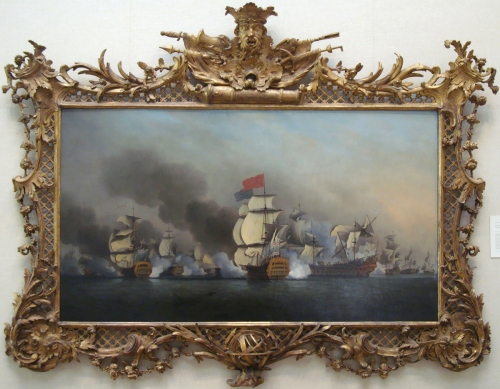 This theoretical reconsideration of the frame, and a more general appreciation of the importance of material culture broadly defined, means we are now ready to accept the idea that the frames around paintings and drawings “may even acquire a semantic value,” in Schapiro’s telling phrase.[6] A good example is the magnificent trophy frame, perhaps carved by a Huguenot craftsman such as Isaac Gosset, in which Samuel Scott’s Vice Admiral Sir George Anson’s Victory off Cape Finisterre is displayed.  The frame here is no arbitrary ornament. Instead the commemorative qualities of the painting spill over into the frame and vice versa. The frame is not a simple boundary, and the distinction between what is inside and outside is far from straightforward to define. We know from similar examples that the cost of such exuberant trophy frames could sometimes be as much, or even more, than the paintings they framed, making frames a powerful reminder that concepts of value are not necessarily stable over time.

Moreover, art historians are also becoming increasingly sensitive to the ways in which artists approached their work with framing in mind. When focusing on a painting or drawing, the frame sits on the margins of the viewer’s perceptual field and can have a striking impact on responses to the painted surface.

As a result we are starting to better understand the preparations artists made to frame their works with an eye to their sale and the networks of framemakers who supported them, especially with the advent of public exhibitions in the 1760s. Joseph Wright of Derby, for instance, had a favorite Italian frame he used for exhibition pictures and used it when exhibiting his painting of the Earth Stopper in 1773. Although the painting sold he refused to part with the Italian frame given the “shabby price” he was offered for the painting.[7]

While it is true that the majority of the Center’s paintings are no longer in what might be called their ‘original’ frames, the frames remain worthy of study nonetheless for the history they tell of changing taste and of the original interiors for which they were sometimes made. Doubtless the early twentieth century Duveen frame in which Van Dyck’s portrait of Mountjoy Blount, Earl of Newport (1637-38) is now displayed bears little relation to a frame of the 1630s. Yet its current frame reveals important shifts in taste and over the centuries and also sheds light on perceptions about what a Van Dyck frame should look like in the gilded age.

Shifting patterns of taste and discrimination, the vagaries of markets and the traffic of luxury goods, all make the study of the frame a point of real concern and bring us back to the realm of the social meaning of material culture, as distinct from the quest to find intrinsic meaning in works of art. The Center therefore hopes that its frame collection will not only serve those already committed to the history of frames but also stimulate further interest in and appreciation of this fascinating part of material culture.

[5] For an exemplary approach see Paul Hills, ‘The Renaissance altarpiece: a valid category?’ in Peter Humfrey and Martin Kemp, eds., The Altarpiece in the Renaissance  (Cambridge: Cambridge University Press, 1990) pp. 35-36.

6 Comments to “Frames at the Yale Center for British Art”