Authors in the frame: ‘Reading’ novel frontispieces in the eighteenth century

I had the idea for this piece when I saw my friend Lynn Roberts post a frontispiece of Henry Fielding on Twitter – the same one, in fact, featured below. It reminded me of some of the work I’d done for my PhD on Samuel Richardson, which included looking at how 18th-century frontispieces functioned as the equivalent of modern book jackets. 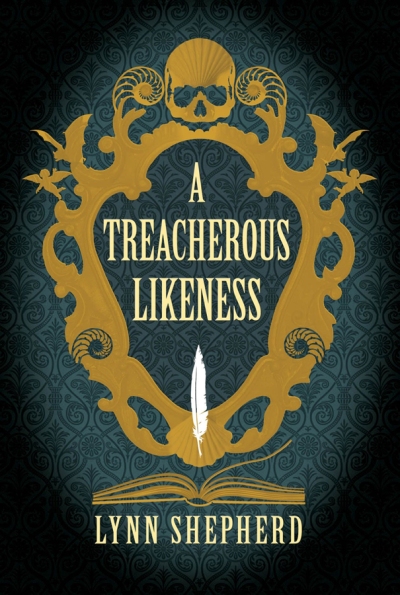 There’s a nice synchronicity here, too, in that the jacket for my own latest book features a frame, and Lynn herself helped me to source the beautiful frame image that’s now central to the design of my website (you can see that here).  And now, as they say, read on…

When you pick up a novel in a bookshop, or browse titles online, how do you make a judgment about what sort of book you’re looking at? From the cover, of course. There are all sorts of clues, both overt and covert, in book jackets – from the type of illustration, to the choice of colour scheme, to the size and type of font. Abstract designs and moody photography announce ‘serious literature’, just as soft-focus images of women with their backs to you say ‘female fiction’, and fidgety lettering in primary colours screams ‘chick lit’. But what happened in the days before jacket designs? When all books were presented for sale in plain leather or card bindings, how did readers pick up those messages then? The answer was the frontispiece.

Frontispieces were included in books from as early as the 16th century; some were portraits of the author, others illustrated the text. What they all had in common was a deliberate marketing intent: these images functioned both as signposts, indicating the genre and content of the volume, and hooks to draw a potential reader in. So with the rise of the novel in the mid-18th century, it was natural that this upstart new literary form should borrow all the established tricks of the book trade, including the judicious selection of an appropriate frontispiece image. To see how these worked, I’m going to look at the frontispiece portraits of those two great rivals for the title, ‘Father of the Novel’, Samuel Richardson and Henry Fielding. We can then explore not just what these images say about the authors themselves, but what they tell us about how readers ‘read’ these carefully-constructed pieces of non-verbal communication, placed so prominently at the beginning of the text.

We’ll start with a game of literary ‘spot the difference’, and see what we can glean about the characters and works of these men, just from their portraits.

In the blue corner we have ‘Mr. S. Richardson’, master printer, from a posthumous edition of Sir Charles Grandison published in 1770. It’s based on the fine portrait painted by his friend Joseph Highmore, which you can still see in the Stationers’ Hall in London. 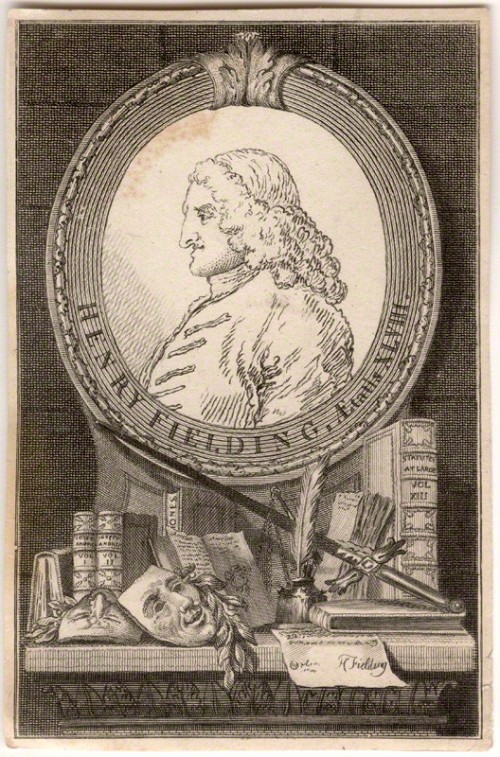 And in the red corner we have ‘Henry Fielding Aetatis XLVIII’, from the 1762 edition of his Works.  The drawing on which this engraved portrait is based was executed by William Hogarth eight years after Fielding’s death.

The first useful clue can be found in the way their names are shown: Richardson is plain ‘Mr’, while Fielding has his full name and his age inscribed in Latin. The way the portraits are presented is even more strikingly different: the self-made tradesman Samuel Richardson is shown in full three-dimensions, in a plain surround and sombre quasi-clerical garb; while Fielding, who came from an impoverished family but had relations in the nobility, is depicted in the more formal and aristocratic profile form, surrounded by the symbols of his life and art – pen, ink and paper, copies of his novels, a book of legal statutes as befits a magistrate, and the theatrical masks that represent his career as a dramatist. In other words, we are invited merely to ‘see’ Richardson, and accept the image as an authentic likeness of its subject, but we have to ‘decode’ Fielding from all his intellectual and iconographical apparatus.

So, what can we then deduce from these images about the pages of text that followed them? Based on the portraits, Richardson’s novel will offer a combination of high moral seriousness and an attempt to render ‘real’ life; while Fielding’s work will be an exuberant and sophisticated performance of self-conscious artifice. And that, dear reader, is pretty much exactly what you will find. On the one hand an attempt to render the ‘recesses of the human heart’ by writing ‘to the moment’; and on the other a right rollicking tale, stuffed with classical allusions, into which the author will repeatedly insert his own observations, annotations, and dissertations. Or as one 1938 textbook put it, in Richardson “sentimentality and analysis”, and in Fielding “virile satire and coarse fun”.

As you can see, referring to the two of them as prize fighters in the red and blue corners isn’t as fanciful as it might initially have sounded – Fielding himself claimed they were “Rivals for that coy Mistress Fame”. Indeed Richardson and Fielding were polar opposites in almost every way you can imagine, from their backgrounds, to their personalities, even their handwriting. In fact I suspect that you’ll only need a glance at the two samples below to know which one is which:

Samuel Richardson: detail of an autograph letter to the Rev. Benjamin Kennicott, 1754. Courtesy of Christie’s

But there are subtler messages in the two frontispieces, which lie not in what sets them apart, but in what unites them: the oval frame-with-a-frame.

What strikes the spectator immediately about this feature is its distancing and formalising effect.  In a more conventional portrait, with a fully realised and lifelike backdrop, it’s possible to create the illusion that the picture frame is providing a ‘window’ on the sitter – a glimpse of the real person caught in a moment of time.  But a frame-with-a-frame actively works against such a suspension of disbelief, and makes it difficult to view the image inside as anything other than a work of art. It is – in Michael Fried’s terms – a classic example of a picture as ‘theatricality’ rather than ‘absorption’. And that distinction throws an interesting new light back on our two frontispieces.

The Fielding image absolutely glories in its own theatricality, using the ornate frame and elaborate appendages to create an intellectual representation that is as far from realism as one can possibly get.

The Richardson one, on the other hand, does all it can to achieve exactly that realism within the narrow constraints permitted by the oval form. He has no accompanying apparatus, and it’s just possible to imagine this portly little printer sitting there on the other side of that ledge, and looking over it towards us and drawing us in.

There’s another interesting aspect to the use of the oval frame in an author frontispiece, which takes us back to its roots in classical sculpture. The bust-length portrait in an oval surround has its origin in the Roman tradition of the imago clipeata.  This was a heroic form of male portraiture in which the head and shoulders of victorious generals were displayed in the forum for the emulation of lesser men, framed against the circle of their own shield.  The imago had, therefore, both an illustrious history and a quite specific civic and moral intent. That those connotations were still alive and well in Georgian England is evident in a painting like James Northcote’s Worthies of England (1828), now in the Foundling Museum.

James Northcote, The Worthies of England, 1828, © Coram in the care of the Foundling Museum

This picture shows a gallery of oval portraits, most of them eminent writers. Placed in a study or library, such galleries of literary heroes performed the same function as the Roman imago, acting, as John Evelyn put it, as a ‘puissant spurre’ to greater intellectual endeavour.  It is no coincidence, therefore, that the oval imago became the dominant form for the author’s frontispiece, or that those who published Richardson and Fielding should have chosen it to depict two novelists who were not just the first, but among the finest.

Lynn Shepherd is the author of three literary mystery novels: Murder at Mansfield Park (UK)/ (US),inspired by Jane Austen; Tom-All-Alone’s (UK)/The Solitary House (US), inspired by Charles Dickens; and A Treacherous Likeness (UK)/A Fatal Likeness (US), based on the lives of the Shelleys. Her next novel is called Darkness Visible, and draws on Bram Stoker’s Gothic classic Dracula; it will be out in 2014. Her website is www.lynn-shepherd.com, and her Twitter ID is @Lynn_Shepherd.

4 Comments to “Authors in the frame: ‘Reading’ novel frontispieces in the eighteenth century”