Caricatures and cartoons have included, used and otherwise maltreated frames for a long time. In the beginning, when the main thrust of a comic drawing was bitingly satirical rather than sugared with added laughter, frames provided background detail and annotation. 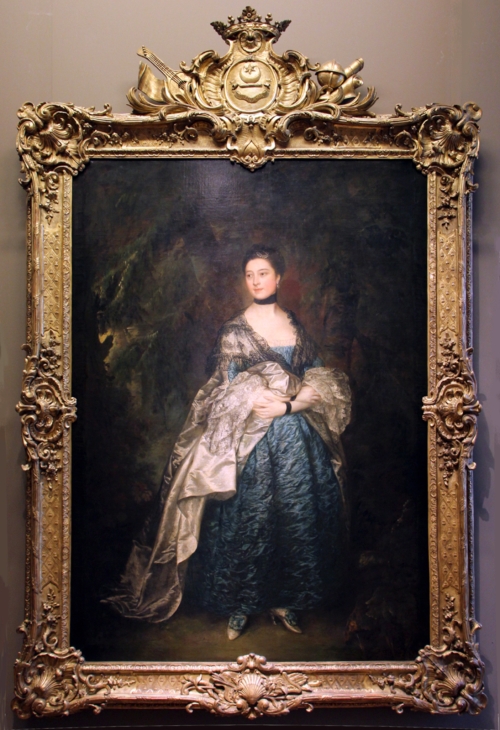 Saint-Aubin’s watercolour sketch of the 1767 Paris Salon shows the devil examining one of Boucher’s portraits of Madame de Pompadour in an approximation of its original frame – possibly this one (above), now on Gainsborough’s Lady Alston in the Louvre, or again, possibly not. The rough suggestion of a gilded Louis XV frame is really there to suggest mistressy opulence, and also to provide the cartouche at the top with Mme de Pompadour’s armorial tower carved in it, so that there can be no danger of the onlooker mistaking the sitter – even without the added title above the frame. 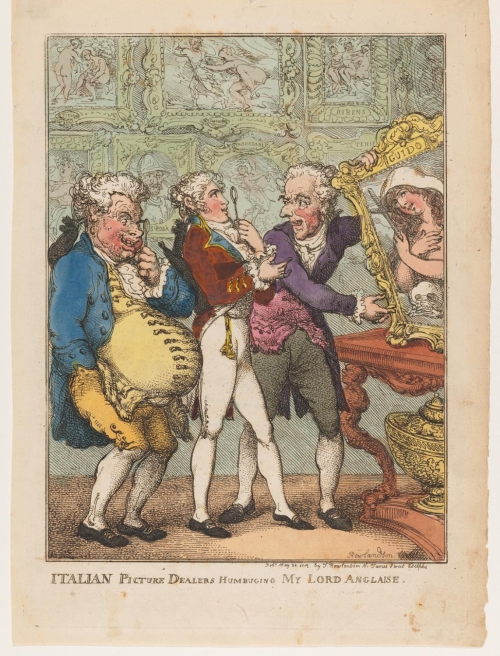 Gillray’s art lover is more knowledgeable, but his experience in judging antique sculpture, pots or coins has obviously caused him to take his eye off the domestic ball, so to speak.  His portrait on the wall behind him has a frame with antlers at the top, signifying that his wife is cuckolding him – probably with someone younger, more dashing, and with less of a museum in his house.

Forty years after Gillray’s poke at archaeological nerdery, Punch magazine was founded, and rather more comedy began to insinuate itself into the satire. The cartoon as we know it today struggled into the light: much more finished as a drawing, and with far longer captions, but otherwise modern, topical and often pretty light-hearted. The almost wordless example above is – as it were – a retrospective cartoon, drawn in 1931 in the style of the 19th century, and shows Mr Punch, with his little dog Toby at his feet, toasting some of the great founding cartoonists of the magazine, including Richard Doyle, John Leech, John Tenniel, and Charles Keene, as well as writers like Thackeray and the publisher Mark Lemon. Apart from the sculpted figures of Thackeray and Leech, they are all portraits, enshrined in what must be a golden wall of frames. 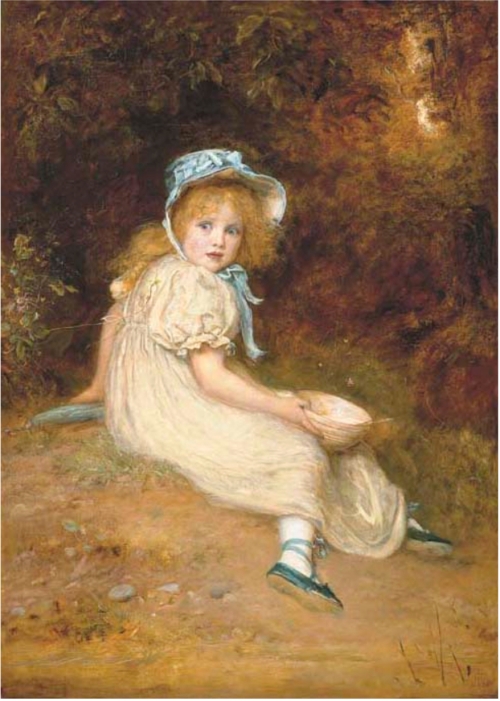 By the last decades of the century, cartoons had even revolutionized the advert. This one capitalizes on the success of one of three paintings by Millais which had been shown in an exhibition at MacLean’s Gallery in 1884. The Art Journal remarked on all of them (they show three girls in ascending sizes, from Little Miss Muffet, through A message from the sea, up to the largest Mistletoe-gatherer, who sports a sickle), praising the painting of youthful skin, emotions, and landscape backgrounds. The enterprising Mr Judson noted both the fame of the paintings and the apparently massive gilt frame of Little Miss Muffet (now in a private collection, and invisible to the inquiring researcher), and decided to use both to promote his gold paint – what we would now call ‘radiator paint’, and the bane of conservators. The guilty curator is seen inserting his wandering finger into the grubby mouldings on a gallery expedition, and then touching up the damage from a vat of Judson’s gold paint. If you are in any way involved in antique, 19th century, or otherwise interesting frames which have been gilded, this cartoon is rather like a photo of someone spraying graffiti on the Parthenon.

‘When people do posters/ I wish they wouldn’t/ make the wording/ go all round like this’, Punch, 1920;  cartoon on the Underground map posters of Max Gill

Another Punch cartoon (this one from 1920), another pastiche of a very famous work. In this case it was the first of Max Gill’s map posters, commissioned by London Electric Railways in 1913 to hang in Tube stations, cheering up the lot of the commuter and generally helping to restore an ailing service. These maps are packed with action, people, and tiny perspectival buildings planted over the venous system of roads and river in a huge colourful panorama.

The Wonderground maps have their own integral painted borders, with the coats of arms of various London districts in the corners and centres, and inscriptions running round the frieze.  This is evidently the one thing which the Punch cartoon commuter took away with him, as he had to turn himself all round to read each of the four sides. (It is, parenthetically, what men accuse women of doing when they read the more usual sort of map – turning it around so that the car travels in the direction of the map. Perhaps it should have been a woman doing a handstand on the platform).

It is also a feature of inscribed frames from the Renaissance and earlier; for example on the frieze of the frame now applied to the Moroni portrait, above. Do not try a handstand in the National Gallery when reading this, as it’s in Latin, and you may be upside-down for quite a while. 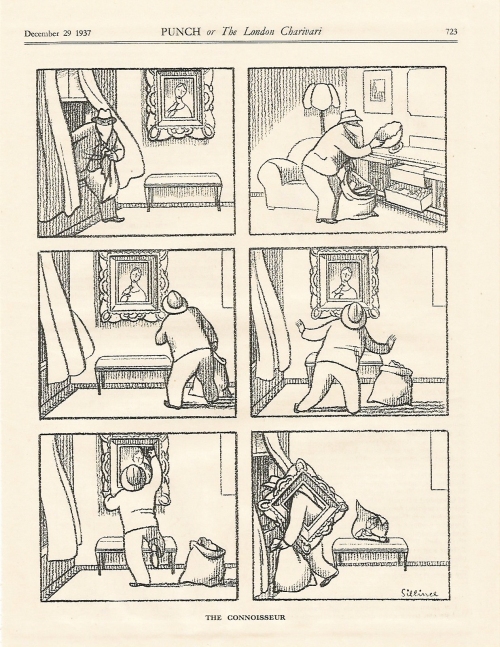 Once more with Punch, and a cartoonist who, for the first time, truly understands the value of the frame, like Dran, much later, at the head of this piece. What more can you say…? – how many of you out there have bought a really bad painting (or even a mediocre painting) at auction, just to get your hands on its spectacular frame…? 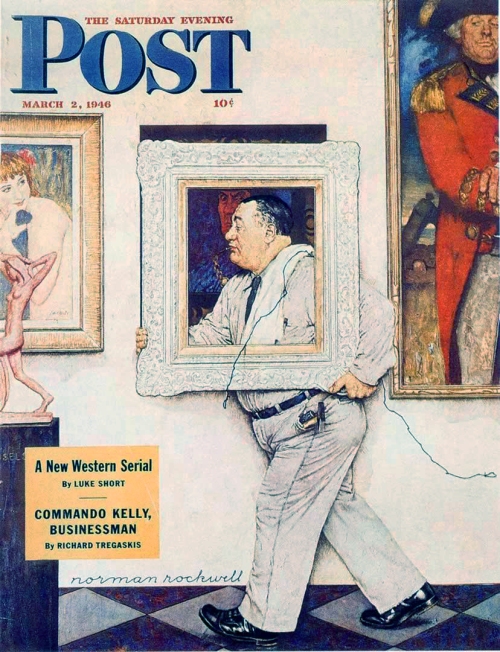 Norman Rockwell also understood the value of a frame, but again mainly as a prop in his slightly surreal world, where occupants of frames tend to look quizzically out at the human performance before them. Here is a museum technician elevating himself into an exhibit in a compo frame ‘in the white’, much to the disgust of the Renaissance prince behind him; does the frame make the icon? 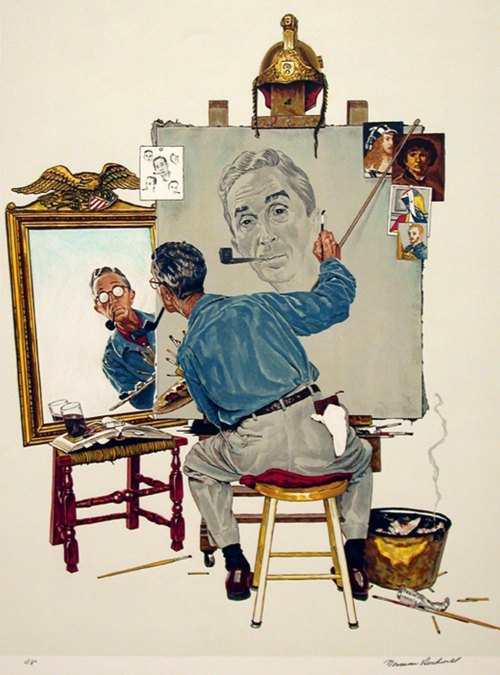 For Norman Rockwell, it does, in a sly sort of fashion.  The looking-glass in which he studies himself has the American eagle and flag at the crest, cheekily establishing his blinded, skewed image as the great American artist, whilst his canvas has created its own crest on its own invisible frame. This is a Roman helmet, implying his ‘classical’ credentials – borne out by the fact that the classics of self-portraiture stuck on the corner (Dürer, Rembrandt, Van Gogh) all have Rockwell’s own features.

Cartoons from this point become progressively self-explanatory, so here is a selection of frame-centric examples to brighten your world an atom, kindly sent to The Frame Blog or self-excavated.

Suitable for framing (with thanks to Rick Granick) 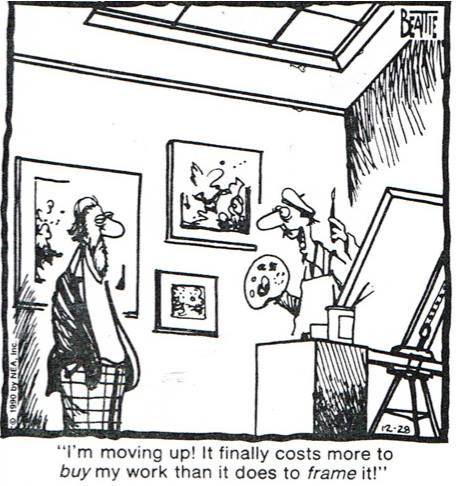 Bruce Beattie, Beattie Cartoons (with thanks to Rob Markoff)

Mike Seddon (with thanks to Dorien Tamis)

Stephan Pastis (1968-), Pearls before Swine (with thanks to Rob Markoff)

Stephan Pastis (1968-), Pearls before Swine (with thanks to Rob Markoff) 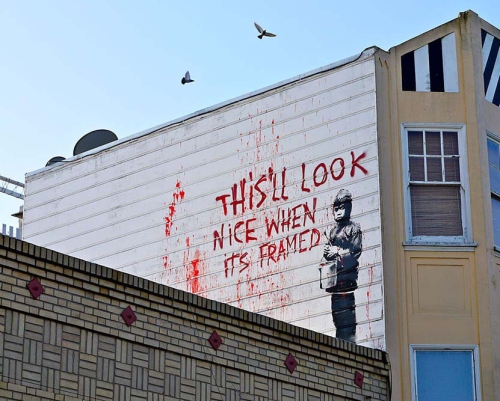 Framing an Italian bust (with thanks to Heidi)

Frank Zappa (with thanks to Rob Markoff) 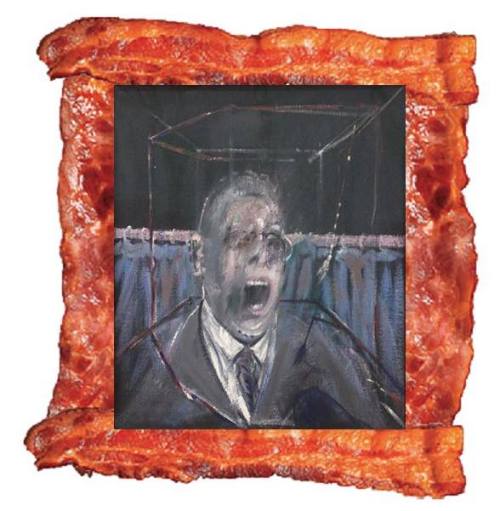 Francis Bacon (with thanks to George Shackelford, I think it was)

3 Comments to “Caricatures and cartoons: framing satire and wit”